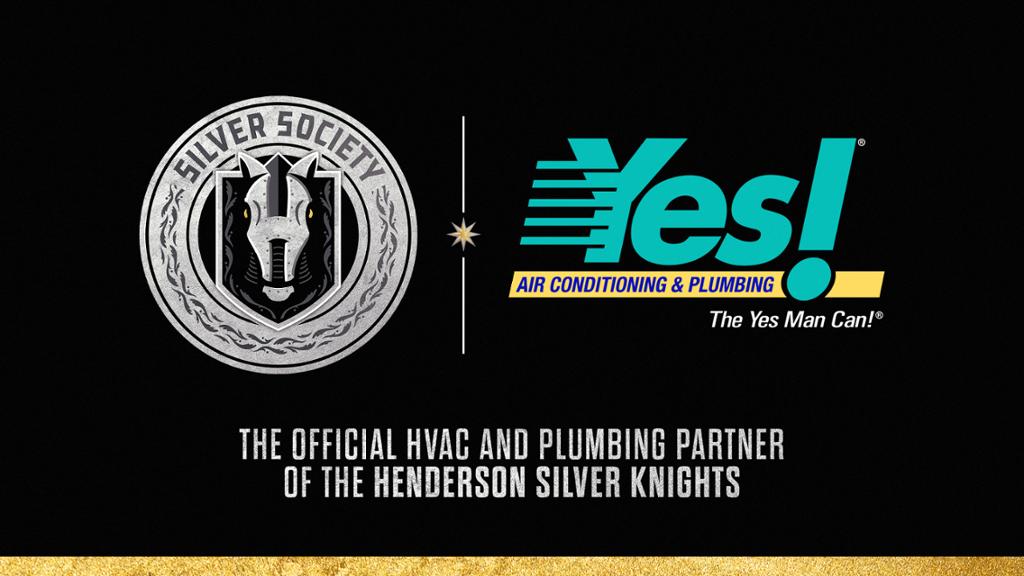 HENDERSON (August 26, 2020) – The Henderson Silver Knights announced today, August 26, their partnership with YES! Air Conditioning & Plumbing. YES! is the first organization to be designated as a member of the Silver Society, an exclusive group of founding partners for the Silver Knights, Henderson Event Center and Lifeguard Arena.

“At the Vegas Golden Knights we’ve seen firsthand how YES! Air Conditioning & Plumbing have positioned themselves as a true community partner,” said Vegas Golden Knights President Kerry Bubolz. “We’re excited to continue our work with them at the Henderson Silver Knights where they’ll play an integral role in bringing to life our shared vision for the community as a member of the Silver Society.”

As the official HVAC and Plumbing partner of the Henderson Silver Knights, the YES! logo will be featured in the ice at the Orleans Arena, Henderson Event Center and Lifeguard Arena, and on dashboards at home games. Their name and logo will also be displayed on one of the ticket offices at the Henderson Event Center. YES! will sponsor one home game every year and will be featured on Silver Knights radio broadcasts and digital assets.

ABOUT THE HENDERSON SILVER KNIGHTS
The Henderson Silver Knights are the American Hockey League affiliate of the Vegas Golden Knights, owned and operated by Black Knight Sports and Entertainment LLC. For the latest news and information on the Silver Knights visit hendersonsilverknights.com. Fans can follow the team on Facebook, Twitter, Instagram and TikTok.

ABOUT YES! AIR CONDITIONING & PLUMBING
Yes! Air Conditioning and Plumbing has proudly served the Las Vegas community for over 45 years. Their mission is to provide industry leading HVAC and Plumbing solutions along with top tier customer service to residents of Southern Nevada.