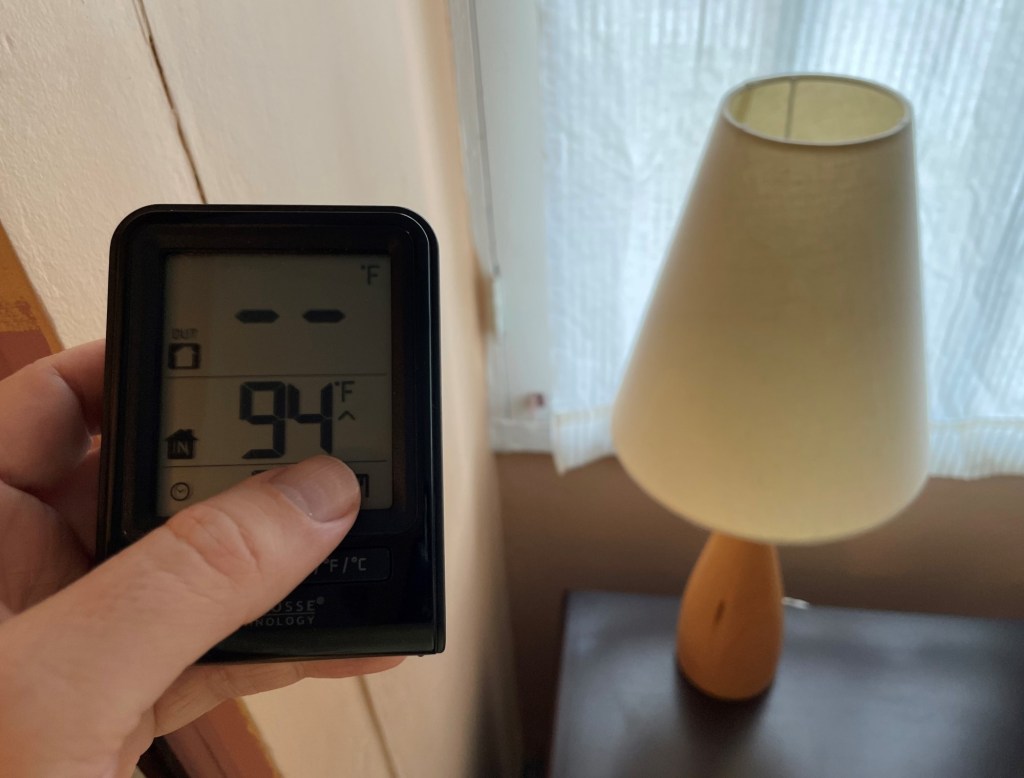 Have you been “precooling” your home in the morning by setting your thermostat to 70 degrees, as the experts are advising us? Nice idea, but it doesn’t apply to those of us without central air conditioning.

I don’t know when my house was last 70 degrees. Probably sometime in July, for a few minutes around dawn. The past three or four weeks my household thermometer has never read below 80.

Ever since I got back from balmy Portland on Aug. 29, the Inland Empire has had high temps of 98 degrees or more. Which makes me wonder why I came back. My house could double as a sauna.

After four days of intense heat, and with temps of 104 and 107 due for Labor Day weekend, I splurged for two nights in a budget motel. That was in Culver City. The change of scene was fun. And crucially, the motel had air conditioning.

(Unlike two years ago, when I thought I was being smart by getting a room in Santa Monica over a steamy Labor Day weekend, only to find the older motel didn’t have a/c.)

I drove home on Labor Day morning, turned on my two portable air conditioners, then left for five hours. By 4 pm, when I returned, it was 103 degrees outdoors and 93 indoors.

Now that’s a hot house. I may as well shut off the air conditioners and grow orchids.

It wasn’t much different Tuesday and Wednesday. Those of you with thermostats have been urged to sacrifice by setting them at 78 during the peak period, 4-10 pm Even with my units running, my house is 83 when I go to bed, and 81 by morning.

But I’m glad to have these air conditioners, ineffectual as they may seem. They’re taking the edge off and allowing me to sleep. There’s only so much they can do during what’s been called the worst September heat wave in state history.

It’s almost over. The heat should break on Friday. By early next week we might have highs in the 80s and lows in the 60s.

Finally, my house might precool to 70 on its own.

When I asked where you were when Elvis Presley died – the afternoon of Aug. 16, 1977 – there were more comments than I could use, and after my column appeared, I got a bunch more. Here are a few.

“I was working for May Company as the ticket maker for the store. The executive secretary nearly passed out,” Theresa Dufresne said, “so I had to cover her job and the manager of the store took her home. It really affected people in a huge way.”

Dave Stubbs of Azusa was vacationing with his family in a cabin in Grass Valley, TV on, when the news broke. “I remember my mom crying,” he said.

“As I was being discharged from Kaiser Hospital in Fontana with my 3-day-old baby daughter,” said Vicki Jaramillo of Fontana, “the nurse pushing my wheelchair asked ‘Did you hear that Elvis died?’ No, I had not heard it, and I felt pretty sad on such a happy day.”

Question: Can we belatedly discharge this discharge nurse?

Debra Rittmiller had gone to Universal Studios with her brother that morning and they followed that with lunch at Shakers in Glendale. They had just ordered lunch when they overheard a customer say Elvis had died. Rittmiller was a big fan, and when her food arrived, there at Shakers, she was too shaken to eat.

This Aug. 16, she and her brother convened for lunch, just as they had 45 years ago. This time they ate.

Art Conn of Hemet, who had followed Elvis through basic training at Fort Hood in Texas, was a civilian Army employee in Germany in 1977 and heard the news via the Armed Forces Network. The network shifted into “a multi-hour tribute to the man, including interviews from his time stationed in Germany,” Conn related. “I was sold on AFN from then on.”

LA musician Allan Frank was busking on the streets of Hamburg, Germany. On Aug. 16, 1977, another busker came running down Spitaler Strasse, a pedestrian-only street, shouting all the way, “Elvis is dead! Elvis is dead!”

“People shopping stopped and turned as he ran toward us,” Frank recalled, adding that the street had great acoustics and the man’s voice carried. “We thought it was a joke. But it wasn’t.”

Dave Snyder of Redlands was at his job at Offutt Air Force Base when he heard the news. In a way he wasn’t surprised. He’d seen Elvis twice in the past, in Las Vegas and in San Bernardino. On June 19, 1977, he and his wife had seen Presley in concert at Omaha, Nebraska, and were dismayed.

“The Elvis in Omaha was not the Elvis I had seen before. He was sweating profusely through most of the show and forgot the words to some of his songs,” Snyder recalled. “My wife had never seen him in person before and was disappointed.”

Going back to Elvis in San Bernardino, a column on those 1972 and 1974 concerts is coming. If anyone who saw him at Swing Auditorium wants to chime in, please do so. Better to have your comments before my column appears than after.

Queen Elizabeth’s death Thursday at 96 for me brought back the pleasant memory from June of the backyard party in Upland to celebrate her Platinum Jubilee: 70 years on the throne. A dozen or so Anglophiles and former British subjects ate cucumber sandwiches, sang “God Save the Queen” and shared why Elizabeth meant so much to them. “She’s just always been there,” one attendee told me. “She’s always done her duty.” And now, after seven decades, her duty is complete.